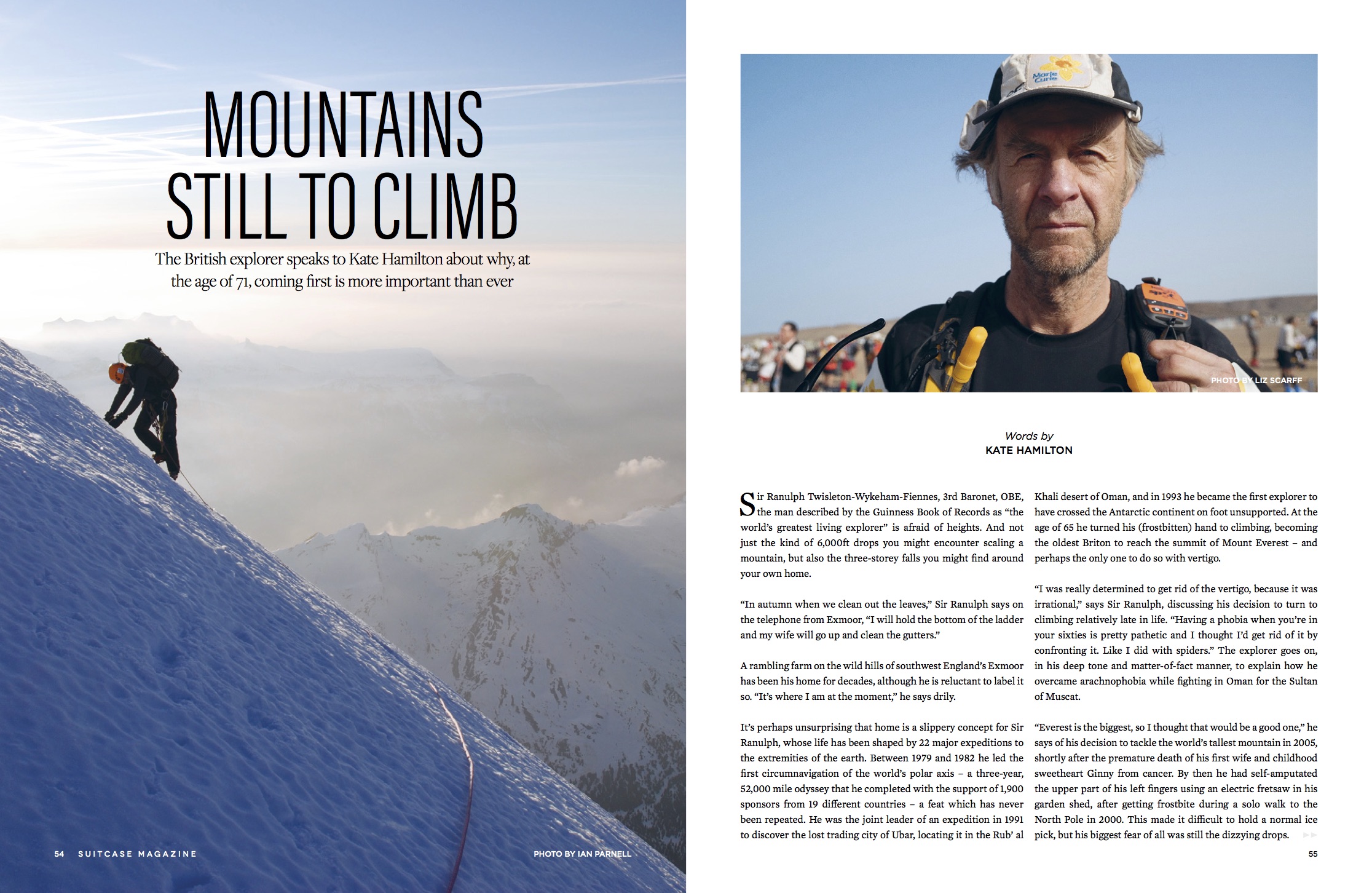 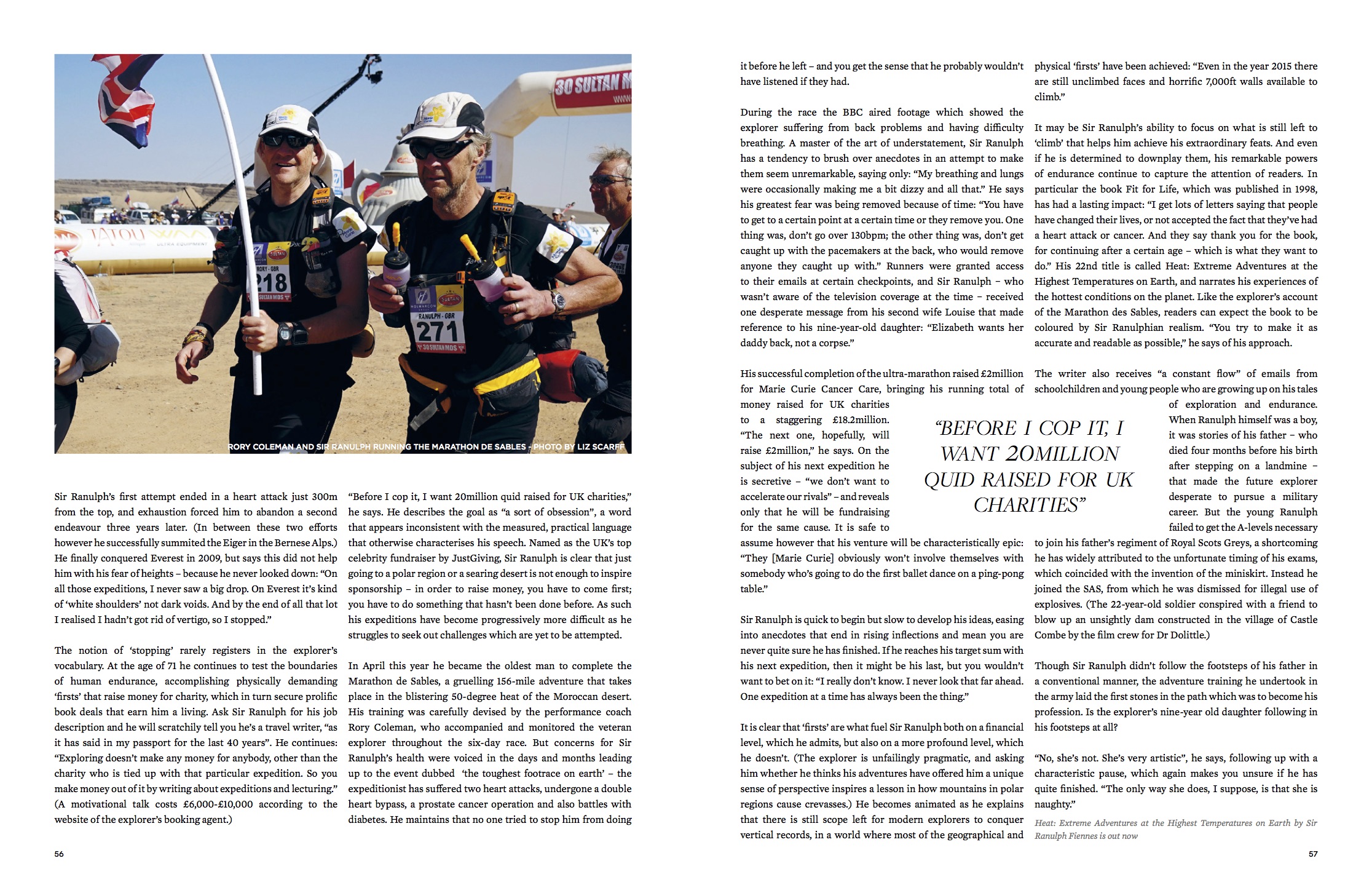 Sir Ranulph Twisleton-Wykeham-Fiennes, 3rd Baronet, OBE, the man described by the Guinness Book of Records as “the world’s greatest living explorer” is afraid of heights. And not just the kind of 6,000ft drops you might encounter scaling a mountain, but also the three-storey falls you might find around your own home.

“In autumn when we clean out the leaves,” Sir Ranulph says on the telephone from Exmoor, “I will hold the bottom of the ladder and my wife will go up and clean the gutters.”

A rambling farm on the wild hills of southwest England’s Exmoor has been his home for decades, although he is reluctant to label it so. “It’s where I am at the moment,” he says drily.

It’s perhaps unsurprising that home is a slippery concept for Sir Ranulph, whose life has been shaped by 22 major expeditions to the extremities of the earth. Between 1979 and 1982 he led the first circumnavigation of the world’s polar axis – a three-year, 52,000 mile odyssey that he completed with the support of 1,900 sponsors from 19 different countries – a feat which has never been repeated. He was the joint leader of an expedition in 1991to discover the lost trading city of Ubar, locating it in the Rub’ al Khali desert of Oman, and in 1993 he became the first explorer to have crossed the Antarctic continent on foot unsupported. At the age of 65 he turned his (frostbitten) hand to climbing, becoming the oldest Briton to reach the summit of Mount Everest – and perhaps the only one to do so with vertigo.

“I was really determined to get rid of the vertigo, because it was irrational,” says Sir Ranulph, discussing his decision to turn to climbing relatively late in life. “Having a phobia when you’re in your sixties is pretty pathetic and I thought I’d get rid of it by confronting it. Like I did with spiders.” The explorer goes on, in his deep tone and matter-of-fact manner, to explain how he overcame arachnophobia while fighting in Oman for the Sultan of Muscat.

“Everest is the biggest, so I thought that would be a good one,” he says of his decision to tackle the world’s tallest mountain in 2005, shortly after the premature death of his first wife and childhood sweetheart Ginny from cancer. By then he had self-amputated the upper part of his left fingers using an electric fretsaw in his garden shed, after getting frostbite during a solo walk to the North Pole in 2000. This made it difficult to hold a normal ice pick, but his biggest fear of all was still the dizzying drops.

Sir Ranulph’s first attempt ended in a heart attack just 300m from the top, and exhaustion forced him to abandon a second endeavour three years later. (In between these two efforts however he successfully summited the Eiger in the Bernese Alps.) He finally conquered Everest in 2009, but says this did not help him with his fear of heights – because he never looked down: “On all those expeditions, I never saw a big drop. On Everest it’s kind of ‘white shoulders’ not dark voids. And by the end of all that lot I realised I hadn’t got rid of vertigo, so I stopped.”

The notion of ‘stopping’ rarely registers in the explorer’s vocabulary. At the age of 71 he continues to test the boundaries of human endurance, accomplishing physically demanding ‘firsts’ that raise money for charity, which in turn secure prolific book deals that earn him a living. Ask Sir Ranulph for his job description and he will scratchily tell you he’s a travel writer, “as it has said in my passport for the last 40 years”. He continues: “Exploring doesn’t make any money for anybody, other than the charity who is tied up with that particular expedition. So you make money out of it by writing about expeditions and lecturing.” (A motivational talk costs £6,000-£10,000 according to the website of the explorer’s booking agent.)

“Before I cop it, I want 20million quid raised for UK charities,” he says. He describes the goal as “a sort of obsession”, a word that appears inconsistent with the measured, practical language that otherwise characterises his speech. Named as the UK’s top celebrity fundraiser by JustGiving, Sir Ranulph is clear that just going to a polar region or a searing desert is not enough to inspire sponsorship. In order to raise money, you have to come first; you have to do something that hasn’t been done before. As such his expeditions have become progressively more difficult as he struggles to seek out challenges which are yet to be attempted.

In April 2015 he became the oldest man to complete the Marathon de Sables, a gruelling 156-mile adventure that takes place in the blistering 50-degree heat of the Moroccan desert. His training was carefully devised by the performance coach Rory Coleman, who accompanied and monitored the veteran explorer throughout the six-day race. But concerns for Sir Ranulph’s health were voiced in the days and months leading up to the event dubbed ‘the toughest footrace on earth’ – the expeditionist has suffered two heart attacks, undergone a double heart bypass, a prostate cancer operation and also battles with diabetes. He maintains that no one tried to stop him from doing it before he left – and you get the sense that he probably wouldn’t have listened if they had.

During the race the BBC aired footage which showed the explorer suffering from back problems and having difficulty breathing. A master of the art of understatement, Sir Ranulph has a tendency to brush over anecdotes in an attempt to make them seem unremarkable, saying only: “My breathing and lungs were occasionally making me a bit dizzy and all that.” He says his greatest fear was being removed because of time: “You have to get to a certain point at a certain time or they remove you. One thing was, don’t go over 130bpm; the other thing was, don’t get caught up with the pacemakers at the back, who would remove anyone they caught up with.” Runners were granted access to their emails at certain checkpoints, and Sir Ranulph − who wasn’t aware of the television coverage at the time − received one desperate message from his second wife Louise that made reference to his nine-year-old daughter: “Elizabeth wants her daddy back, not a corpse.”

His successful completion of the ultra-marathon raised £2million for Marie Curie Cancer Care, bringing his running total of money raised for UK charities to a staggering £18.2million. “The next one, hopefully, will raise £2million,” he says. On the subject of his next expedition he is secretive – “we don’t want to accelerate our rivals” – and reveals only that he will be fundraising for the same cause. It is safe to assume however that his venture will be characteristically epic: “They [Marie Curie] obviously won’t involve themselves with somebody who’s going to do the first ballet dance on a ping-pong table.”

Sir Ranulph is quick to begin but slow to develop his ideas, easing into anecdotes that end in rising inflections and mean you are never quite sure he has finished. If he reaches his target sum with his next expedition, then it might be his last, but you wouldn’t want to bet on it: “I really don’t know. I never look that far ahead. One expedition at a time has always been the thing.”

It is clear that ‘firsts’ are what fuel Sir Ranulph both on a financial level, which he admits, but also on a more profound level, which he doesn’t. (The explorer is unfailingly pragmatic, and asking him whether he thinks his adventures have offered him a unique sense of perspective inspires a lesson in how mountains in polar regions cause crevasses.) He becomes animated as he explains that there is still scope left for modern explorers to conquer vertical records, in a world where most of the geographical and physical ‘firsts’ have been achieved: “Even in the year 2015 there are still unclimbed faces and horrific 7,000ft walls available to climb.”

It may be Sir Ranulph’s ability to focus on what is still left to ‘climb’ that helps him achieve his extraordinary feats. And even if he is determined to downplay them, his remarkable powers of endurance continue to capture the attention of readers. In particular the book Fit for Life, which was published in 1998, has had a lasting impact: “I get lots of letters saying that people have changed their lives, or not accepted the fact that they’ve had a heart attack or cancer. And they say thank you for the book, for continuing after a certain age – which is what they want to do.” His 22nd title is called Heat: Extreme Adventures at the Highest Temperatures on Earth, and narrates his experiences of the hottest conditions on the planet. Like the explorer’s account of the Marathon des Sables, readers can expect the book to be coloured by Sir Ranulphian realism. “You try to make it as accurate and readable as possible,” he says of his approach.

The writer also receives “a constant flow” of emails from schoolchildren and young people who are growing up on his tales of exploration and endurance. When Ranulph himself was a boy, it was stories of his father − who died four months before his birth after stepping on a landmine − that made the future explorer desperate to pursue a military career. But the young Ranulph failed to get the A-levels necessary to join his father’s regiment of Royal Scots Greys, a shortcoming he has widely attributed to the unfortunate timing of his exams, which coincided with the invention of the miniskirt. Instead he joined the SAS, from which he was dismissed for illegal use of explosives. (The 22-year-old soldier conspired with a friend to blow up an unsightly dam constructed in the village of Castle Combe by the film crew for Dr Dolittle.)

Though Sir Ranulph didn’t follow the footsteps of his father in a conventional manner, the adventure training he undertook in the army laid the first stones in the path which was to become his profession. Is the explorer’s nine-year old daughter following in his footsteps at all?

“No, she’s not. She’s very artistic”, he says, following up with a characteristic pause, which again makes you unsure if he has quite finished. “The only way she does, I suppose, is that she is naughty.”